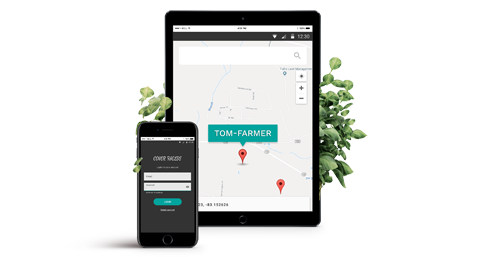 The client needed a mobile app design company to help create a resource for others to learn more about the cover fields they found in their daily lives. Our client on this project is an agricultural industry professional who saw a need to share knowledge about his work with others interested in restorative agriculture.

One part of restorative agriculture is the process of growing cover crops in fallow fields, rotating the growing seasons to increase the nutrients in the field for use in the following season. There are many individuals who enjoy learning more about these cover crops and their impact on wildlife and the long-term sustainability of the land.

The app would need to be useful for both Apple and Android users, and should be accessible for altering and adding data as people found it. A major feature the client requested was the ability to map data in real-time, using current maps. Given all the requirements, the client was unsure that this vision could be achieved, but in partnering with Idea Maker, we made it a reality.

Rather than build two separate apps for Android and iOs, as the client had feared at first, Idea Maker created a cross-platform app that could bridge between the two mobile systems. Referring to our years of experience as a mobile app design company, we chose to work with React Native and  Firebase for our programming. These apps together build a strong and cohesive cross-platform app that could do everything our client requested.

Within the framework, Idea Maker also included the Google Maps API to create an opportunity for users to add their information or look up other’s information regarding the locations of new cover fields. The app allowed people to learn more about restorative agriculture in their area, build on their own knowledge, and track the process of erosion prevention through shared technology.

No matter the project you have in mind, Idea Maker can help you make it a reality. Most products and programs premade on the market won’t provide everything you need or want to make your idea feasible, but working with a custom mobile app design company, like Idea Maker, can bring it all together.

Idea Maker built the custom mobile app quickly and successfully to meet the needs of the My Covers team.