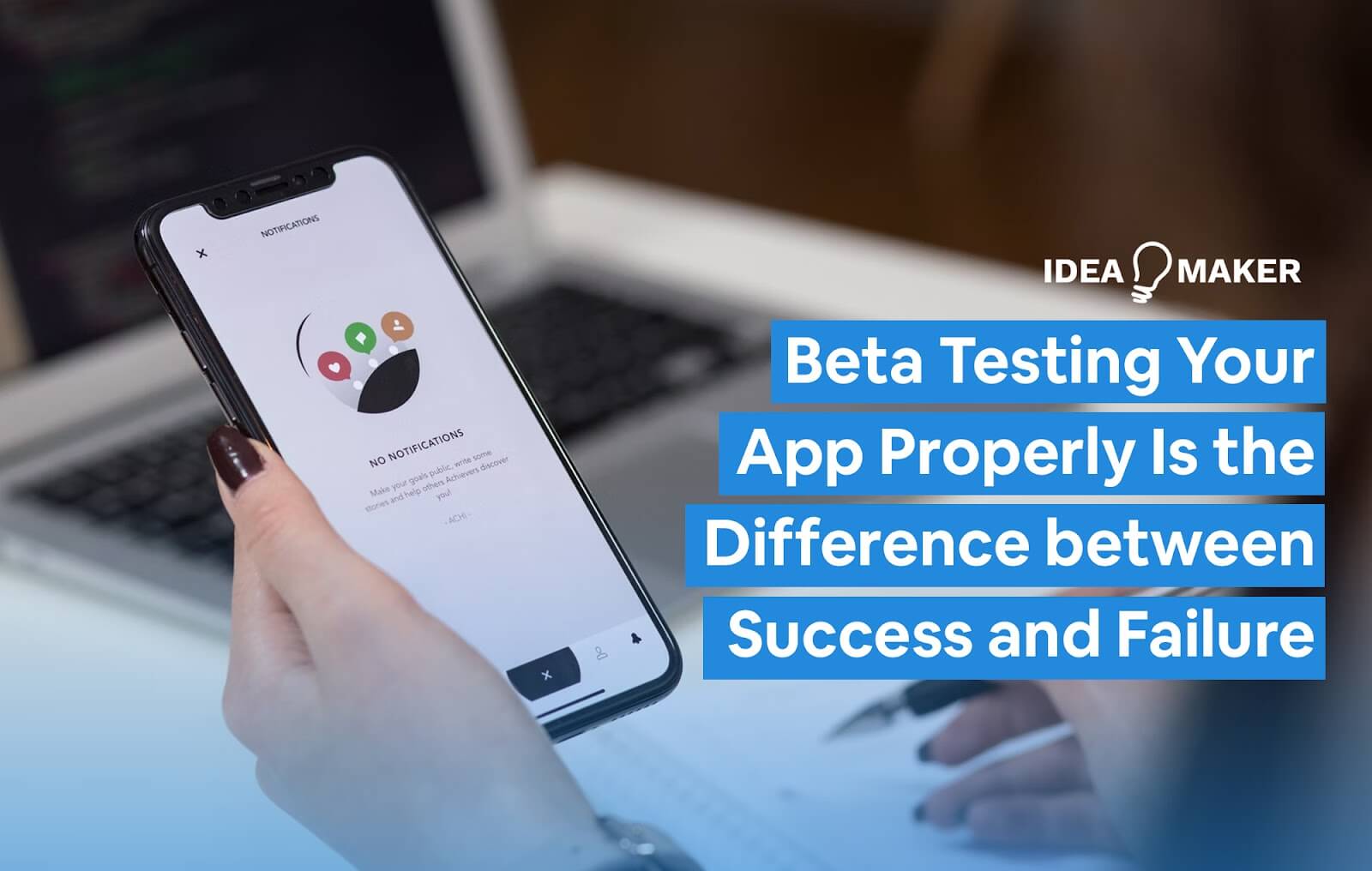 While there’s no such thing as a bug-free app, you can minimize bugs and errors using a robust testing process like that of Idea Maker. This process is often the difference between your app’s success and failure.

This article will discuss the ins and outs of beta testing, allowing you to understand its importance and the steps involved. Keep reading to find out why beta testing your app correctly could be the difference between success and failure.

What Is Mobile App Beta Testing?

When a mobile app undergoes beta testing, it is released to the public for experimentation, usually to an initially small group of people. The job of the public user is to highlight any bugs they encounter and give feedback on the user experience. Once this valuable feedback is collected, the development team makes the necessary bug fixes and modifications, improving UX.

Why Is App Beta Testing Important?

Beta testing is an essential part of mobile app development. Before understanding the processes involved, it’s necessary to learn what makes beta testing so important. Here are just a few reasons.

Did you know 58% of iOS apps encounter unexpected crashes? Besides hardware issues, this is primarily due to improper testing and hugely impacts user experience. These errors can prevent users from enjoying your app altogether until new updates become available, causing many people to lose interest.

Not all public users will have access to the latest mobile devices, so beta testing enables developers to identify device-specific errors. After all, 63% of all iPhones sold are still in use today, so as long as Apple continues to provide support for their older devices, your app must remain compatible.

Downloading an app with a clunky UI, or functionality that doesn’t work correctly is highly frustrating for users. It makes mobile apps appear unfinished and unprofessional. Quality issues can be easily avoided through beta testing or by hiring the correct mobile app developers.

As users provide feedback on your app’s interface, overall design, and functionality, you’ll begin to feel what is and isn’t working. From there, the app can be redeveloped to fix any underlying issues and improve its general functionality while solidifying an excellent UX. As a result, your app will appear finely polished and high-quality.

Apple often withdraws apps that are frequently reported for poor compatibility and quality, making gaining positive reviews essential. Users who have a poor experience are three times more likely to leave a review than those who enjoy an app. Therefore, it’s vital to have an excellent mobile application that causes little frustration and flawlessly serves its purpose.

You can ensure your app is performing correctly by beta testing, keeping users coming back for more, and avoiding negative reviews. One such example is UniWar, developed by Idea Maker, which has seen over 7 million games played since its creation. UniWar has many positive reviews on the Google Play Store due to robust beta testing and high-quality development.

How Do You Beta Test A Mobile App Correctly?

Now you know the benefits of beta testing your mobile app, it’s time to answer the question, how do you beta test a mobile app correctly? There are many ways to execute a beta test, so we’ve broken this process down into five understandable steps for you to consider.

First, you’ll need to define the objectives of your beta test. The goal may appear obvious – to minimize bugs and software errors in your mobile app – but there’s much more to consider. For example, are you focusing entirely on bug fixes, or do you want beta testers to critique user interface and design?

It will be difficult for beta testers to know what to look for while testing without clearly defined objectives. This leads to ineffective testing cycles that waste time and resources. For the best results, ensure you determine a strong list of goals.

Defining the objectives of your beta test helps to determine its scope. In this case, scope refers to how much of the mobile app you want testing, rather than participation size. This includes defining specific app functions and features.

It’s essential your users know which parts require special attention and specific data when running beta tests. For example, there may be an account sign-up page integrated into your app with various fields in need of testing. In this instance, beta testers would input multiple correct and incorrect datasets to ensure all outcomes function correctly.

Beta testing can be the longest part of the development process if done thoroughly. As a result, it’s essential to clearly outline a schedule to ensure the test stays on track. The schedule must determine the test duration from start to finish and how many testing cycles you wish to employ.

For example, you may wish to streamline the beta testing process by running a quick succession of test cycles over a short time, thus getting your app to market sooner. Contrastingly, you may want to run a robust test with technical beta testers that focus on the app’s minutiae. Whatever you decide, a precise schedule will ease the process along.

Before your beta test gets underway, you’ll need to select a bug logging tool to manage maintenance requirements. At Idea Maker, we use ClickUp for bug tracking. The ClickUp platform enables you to easily sort customizable tasks in a way that’s excellent for bug logging.

Like ClickUp, it’s best to choose a SaaS-based logging solution. SaaS is a growing business model with many benefits, such as subscription-based pricing models. Selecting a cloud-based platform helps to enable remote, collaborative error management, perfect for keeping on top of bugs during the open beta phase.

After selecting your bug logging tools, you’ll need to choose a way of receiving feedback from beta testers. If you’ve ever been a beta tester, you’ll understand how frustrating it is when submitting feedback is an awkward process. As such, it’s essential to create an effective channel of data collection between your beta testers and developers.

For smaller projects, you could elect to have direct email contact with users, giving them an email hotline to report their findings. Otherwise, it’s good practice to integrate a webhook into the beta version of your app. This will share event data to your servers when certain functions are triggered, instantly notifying you of bugs.

On average, just 1 in 5 beta testers will fully engage with your test and provide helpful information. This means it’s important to perform your beta testing cycles correctly, so you can collect as much valuable feedback as possible before users become disinterested. Therefore, it’s crucial to understand the function of each beta cycle.

As discussed at the beginning of this article, mobile apps undergo internal tests before entering the beta testing phase, typically known as alpha testing. With an average of 15 – 50 bugs per 1000 lines of code, this testing cycle is used to fix obvious bugs and ensure the app’s code is stable. Internal mobile app testing is completed through various white and black box techniques.

White box testing is used to examine your mobile application’s internal structure, design, and code. It’s used to ensure inputs and outputs are responsive, as well as improve design and security. The main difference between white and black box is that developers are allowed access to the code during white box testing, hence why it’s often referred to as transparent box.

Black box testing is used to examine the functionality of your application without allowing users access to internal code and paths. This means testers can focus on the input and output events of the application, understanding how and if it works based on app behavior alone.

A usability test aims to measure user-friendliness, allowing developers to better understand how the UI/UX can be improved. During a usability test, developers will observe a small number of handpicked users, likely other team members or family and friends, as they use your mobile app. This allows developers to see how the app functions directly in the hands of users.

The following testing phase involves deploying a limited beta release. During this cycle, several early adopters are given access to a preliminary version of the app, otherwise known as the beta. Typically, a limited beta release is restricted to family and friends, keeping the test small and manageable.

Conducting a limited beta release allows you to collect constructive feedback from first-hand users. This lets you identify and fix any bugs missed by previous test cycles, ensuring the app is stable enough for a wider public release.

The final phase of beta testing involves conducting an open beta test. At this stage, the beta version of your application releases to anyone who registers an interest in testing. Depending on your objectives and scope, this phase could see thousands of users testing your app.

By this point, you should have a stable version of your application that has a clear purpose and intended functionality. Open beta testers will provide constructive feedback to identify more bugs, improve overall user experience, design, and app features. The open beta release cycle will lead to a polished mobile application if managed correctly.

Beta testing is one of the last stages of mobile application development, conducted after your project is programmed. Understanding the correct time to beta test helps streamline your project by keeping it on schedule.

What Happens After Beta Testing?

In some cases, after following the four testing cycles, you may need to run through some phases again. For example, if feedback indicates the need for an entire app overhaul, it’s worth starting the testing process again from scratch. Otherwise, after collecting feedback and acting on suggestions, your app will be ready for commercial release.

After reading this article, you should understand why beta testing can be the difference between success and failure. As well as:

You are now ready to beta test your mobile application and make your project a success.

If you’re worried about beta testing your mobile app correctly, it’s worth hiring a development company to help or even build your app. At Idea Maker, we have a team of experts ready to develop polished, cross-platform mobile apps that meet your requirements. Schedule a free consultation with us today if you’d like to learn more about Idea Maker’s services. 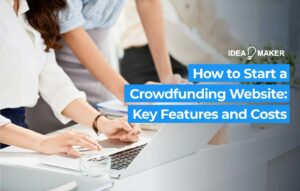 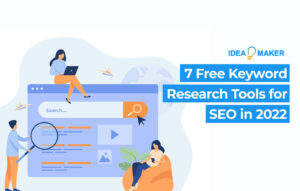 Where can I find competent beta testers?

At Idea Maker. Our team is dedicated to creating high-quality, well-functioning software develops, through expert skill and robust testing.

What skills can be expected from beta testers?

Beta testers are detail-orientated individuals with excellent observational skills. They should be able to identify issues with UI/UX and wider functionality.

Is beta testing and UAT same?

Though the testing process is similar, User Acceptance Testing (UAT) ensures the app meets the project requirements and specifications.

Is beta testing the final stage of testing?

It depends. If an app is still not working correctly after beta testing, it may move to gamma testing. However, apps will generally go through more rounds of beta testing if this is the case.

How expensive is it to hire beta testers?

Depending on how you choose to execute your tests, beta testing can be done at a low cost. For example, public video game testers typically test apps for free simply for the enjoyment of trying something new.

At Idea Maker, we focus on behaviour based beta testing. This allows us to ensure the UI/UX is perfectly the functional and smooth for your userbase.